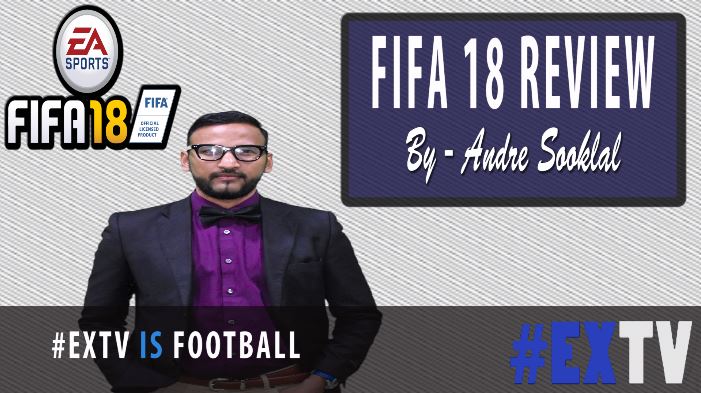 So once again EA Sports has added another title to the very successful FIFA franchise. Having played the game in its very early incarnations as far back as the Super Nintento (yes that far back), to playing with my home nation Trinidad & Tobago in FIFA 98 on the pc, PS2, PS3, Xbox and now PS4, I can safely say I have some serious experience over the years, its time to talk about FIFA 18. You are probably wondering why am I waiting a couple months after to do my review, well the answer is simple. To often we the gamers get caught up in the initial excitement of the game upon release and are very quick so overlook very obvious flaws as a result of the adrenaline rush and also it is very difficult to give a true impression of the game unless you have played it for a couple weeks and truly tinkered with all the features. With the frosbyte engine making the game and in game interface looking as pretty as ever this version of the game definitely stands out.

So lets start of with the Pros shall we?

I was a huge skeptic when EA Sports introduced the journey mode to FIFA 17, I was already worried that it would just be very cliché, boring and unforgettable…I was wrong! I absolutely enjoyed it and loved the attention to detail that was put into it. The Journey of Alex Hunter from his FA try outs all the way up to club level. The interactions turned out to be a pleasant surprise and the story was not bad either. No its not some edge of the seat thriller but exactly what I think any fan of the game would like to experience; to go on the journey and experience the various enviroments that someone in that lifestyle would experience. Having discussions with your manager, your coach, team mates, and agents about performance requirements, contracts and the tension of being in a locker room with players of various personalities was a very welcome addition. Sure it was not perfect but FIFA 18 expands on the journey of Alex Hunter this time around and it’s just as fun as before. The ‘play as a manager’ feature was expanded as well and the negotiation setting was a nice touch! Sure there are preset responses but its sure fun trying to even attempt to sign Leo Messi or Cristiano Ronaldo to your club, just to hear their responses. The attention to detail in this area is also very engaging where you see, at least most of the time authentic coaches, players I a setting never seen before in previous games, you get to discuss terms and deal with varied responses from players. There are a number of fun cut scenes which are loads of fun to watch and it makes the overall negotiating process feel authentic. An area that I was hugely pessimistic about turned out to be one of the most fun parts for me.

Let’s face it. The physics of the FIFA series is often criticized but I sometimes often think we are spoilt to have such an amazing game and our demand for excellence and perfection is a bit overwhelming at times. There are so many aspects of the gaming physics that has changed over the years, such as the defending; how players run, kick, cross, tackle etc. However, one area that I was very impressed with is the crossing. The crosses have been modified where you can swing in various types of crosses. It’s not as just pressing the button and swinging one in but it requires subtle variations which captures in a way the various decisions an actual player may have to make while running in order to adjust his or her body to a cross. It has added an element of unpredictability and makes scoring from a cross very satisfying! The actual individua movements feel a bit more flexible and is definitely more fun You can actually see the varying speed and agility levels of some players and its definitely fun when making a diagonal run into the box and making cut backs. This can be seen when players can shield, dribble, tackle etc. to varying degrees of accuracy and it does not feel out of place. To be quite honest it feels more real.

I have to admit I did not like this feature at first! But it has grown on me. Let’s face it, we all hate when one player stops in the middle of the action to make a substitution. It has been the centre of arguments in all the years I have played the game. You are about to score or make an attacking run and the opposing player stops the game to make a substitution. The feature basically allows you to set up three preset players. During game play, you simply hold down the respective button and then confirm without coming out the game itself. It was not well received in the beginning but admittedly, it did take some getting used to in terms of the controller, however, as time went along the feature grew on me and is definitely a very innovative feature that is a bit of a throw back to the late 90’s Fifa versions. Back then, players could set 3 preset formations and they could be changed with just the tap of a button. I am sure the feature will be tweaked in time but It was a new feature that definitely grew on me and a very fresh take on the game.

This most glaring con about this game is that despite of its very vast improvements in game play, the goal keeping still seems to be a bit of a hurdle. Often times, what seems like the most conventional save is often flopped. The classic keeper running into defenders and causing goals is also very annoying. Some may argue that this is actually realistic and perhaps in some aspects it is, but the often comical mistakes at times can cost you came and can result in some seriously frustrating moments. It is an area which has definitely improved but is still far from perfect.

The officiating! Come on ref!
Let’s face it as fans of the games; refs drive us all crazy. In this version of FIFA, there seems to be some serious inconsistencies with the distribution of Yellow Cards and Red Cards. Many times I have seen the last man blatantly foul players and not even given a card. It is shockingly real how bad the calls are and maybe the very ultra positive side of me thinks maybe they are trying to replicate the human error in officiating but it is very frustrating. It seems when playing the computer, they can do no wrong mostly. It can be tremendously annoying to see the computer give a full on cleats challenge and when you do the same thing you get a ‘Red’. Come to think of it, it does sound a bit realistic! But it is definitely one of my gripes with this game.