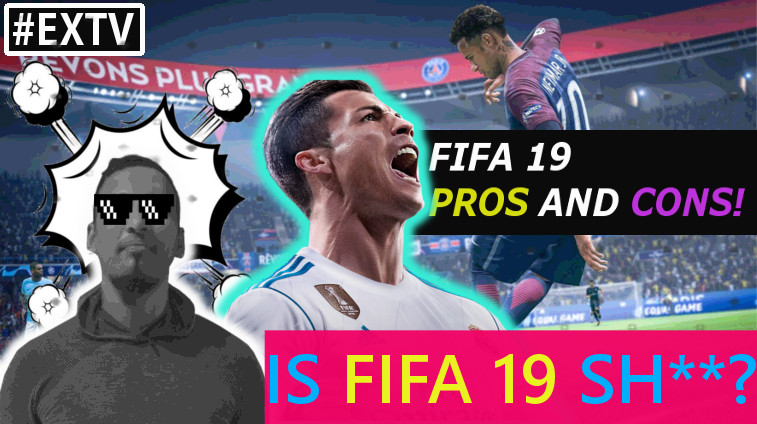 FIFA once again returns and unlike other reviews, I needed some time to really properly play the game and all its features before I could give my honest reactions.  FIFA 19 has brought some interesting new features to the very popular franchise that in some ways address the concerns of repetition by players over the years.

Love or hate this game, it is very difficult to argue that we have come leaps and bounds in terms of the standard of graphics in games. This is coming from a guy who played the first versions of FIFA on the Super Nintendo way back in the 90’s. FIFA19 has added very vibrant colour grading and thematically beautiful interfaces that make you stop and admire just how easy on the eyes it looks. The players, stadiums, cinematics, intros are definitely something worthy of purchase.  A fine example of this is the inclusion of the Uefa Champions League which looks absolutely stunning! You definitely see the attention to detail and combined with the gaming mechanics you simply cannot deny that FIFA 19 gets top marks for its presentation.

For many years in the career mode which is a feature I personally love playing, EASports have definitely made huge efforts to make the experience more engaging and in my FIFA18 review I was full of praise for the inclusion of the negotiating aspect of this mode, The career mode that we know and love is fantastic but the inclusion of the authentic UEFA Champions League experience is definitely a massive plus for the game! One can argue it was always there but it was not the authentic experience and was labelled the European Cup and even though it was implied it was the UEFA Champions League, it really does not compare to the real thing. Clearly, the various rights were acquired to use this and it is totally worth it.  The commentary from Derek Rae and Lee Nixon being added to the regular cast adds that legitimate pore raising effect when you see the wonderfully put together cinematic of your players walking out of the field. This combined with the actual graphics used when watching games is just icing on a wonderful new feature. The stadiums, the chants and commentary show that significant effort was put into this and it shows!

The innovations in gameplay are subtle at a glance but do make a huge difference. Precision passing, body movement, feints, jostling for the ball in 50/ 50 tackles feel entirely different and in a good way. However the changes are great not because of the perfect precision and first tough but the imperfections, you see varying levels of miscontrol and misplaced passes. The skill level, fatigue attributes are very much a factor and are not just numbers but can be clearly seen during gameplay. The ability to create space and various passing combinations is now a lot more fun. It takes some getting used to but once you get the hang of it you can create some wonderful passages of play and it feels more purposeful and realistic. Timing is clearly emphasised in the gameplay. particularly in the shooting. Your ability to time your execution is very important you can end of completely scoffing your shot or have a wonderfully placed finish. You can now push the ball and create space for yourself before you shoot and also when you are on the receiving end of crosses it feels very satisfying when you score a goal because of all the factors involved in scoring a goal.

From the defensive aspect, the ability to outmuscle, fight and time your tackles is definitely an aspect that makes the game interesting and engaging. It is very clear against stronger rated opponents you often come out second best but then that’s pretty much how it is in real life. The ability to have to compensate for how you tackle is extremely important based on the type of opponent. The reliance on pace which was a huge go-to option for many players is no longer a safe format and overall makes the experience quite realistic and to be honest feels like a brand new game at times in terms of gameplay.

I was full of praise when FIFA 18 introduced the quick subs option in the game. If you are like me and absolutely love the tactical aspects of the game then you will definitely love this aspect of the game. You can now go into much greater detail when setting up your teams custom tactics.  You have the typical four scenarios of Ultra defensive, defensive, attacking and Ultra attacking but this time around the game takes a step further where not only can you set formations to adjust to each style but set the movement style of players, width, deep or high line, possession style, attacking movement just to name a few.  You can go into way more detail and have your formations set so that you no longer have to go through the arduous task of having to stop the game to change your tactics, the four scenarios for me at least definitely suffice. The ability to manually stop and change tactics is still there but this is a very welcome feature that makes the game fluid and makes you appreciate the ability to be thoughtful about various scenarios and makes you feel like a proper coach at times. If you want to switch from 4-3-3 to an ultra-defensive 5 at the back you just adjust in-game and it’s done! A perfect example of wonderful this works was when I was pinned back by an opponent and quickly switch to an ultra-attacking set up which I customized and scored on a counter attack without stopping the game! Definitely a fantastic feature.

The Journey mode goes on a bit too long!

So for those of you who don’t know I mentioned in my FIFA18 review that the Journey mode was a pleasant surprise. I enjoyed the new dimension it added to the game and found myself engaged in what a storyline that does has its cheesy moments but definitely would work for its target audience. This time around you have the choice of three playable characters  Alex Hunter his half-sister Kim Hunter and Danny Williams. This puts a nice end to the story that was built up over the last two games but the campaign itself does drag on a bit long and at times I had to admit it felt repetitive and I did crave some variety. The cinematics and cutscenes do take away from the monotony of it at times but It definitely probably should have either be shorted or added some new elements.  This is by means no slight to the overall campaign

Goalkeeper errors are still there!

So for anyone who has played FIFA in the last few years or so will definitely understand the frustration of dominating a game and playing really well only to have your keeper have a tremendous blunder and totally throw the game into chaos for you. It seems the errors occur with greater frequency this time around. One of the most noticeable cases of this for myself is the frustratingly easy way keepers are beaten at the near post. I have keepers who have overall values of 90 and upwards getting beaten by the weakest of shots and also randomly unresponsive at times. Often times headers from ridiculous distances get past the keeper because he is out position and reacts in a tremendously slow to the most non-threatening shots. This is even more apparent when you play against the AI with teams that are rated much lower and the keeper is in unstoppable form making save after save.  This is something I have seen EASports have tried to address but have not quite mastered, expect to lose some sleep after a game when a keeper decides to throw it away. I have no idea if that in an attempt to make the game more realistic, the algorithm throws in random scenarios like this.  Definitely an aspect that needs to be addressed.

So let’s be honest we have been spoilt by having a lovely array of commentators this time around but you can imagine my shock when after drawing 1-1 against AC Milan in my career mode the commentator says the game was a victory or a loss. I was actually shocked because this is a very rare occurrence in previous additions and I found it very shocking.  I am guessing this may be patched up in the updates but it was a bit jarring and can take you out of the experience a bit.

Let’s be honest having to find cons in this game I had to really dig deep but overall the game is visually very stunning and delivers what we all come to expect from the game a very entertaining experience with the authenticity that makes us believe while playing that we are a top-level coach or player.  The Frostbite engine continues to do wonders and the innovations in gameplay are a very welcomed surprise. Many thought before the release of the game that the game was getting repetitive however after playing this I think this was dispelled.  Kudos must be given to EASports for trying to innovate and try new things. While the game is far from perfect it is still lots of fun if you love the franchise and the pros definitely out weight the cons. It is definitely worth the money this time around.  Even though I am not an official game reviewer but simply just another fan of the game I would easily give it a 4 out of 5. So now get your crew, use the new house rules and have fun because it definitely still achieves that.