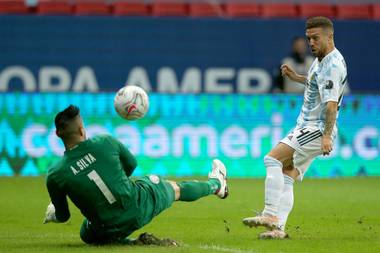 Sevilla man Alejandro Papu Gomez scored for Argentina in a hard fought 1-0 win against Paraguay in their third match of the group stage.

Many rumours were circulating that Lionel Messi would be rested for this game, however, this proved to not be the case as Argentina did in fact make changes but it was not the influential number ten. In the tenth minute after a great pass from PSG man Angel Di Maria, Papu Gomez opened the scoring for Argentina with a lovely well-placed finish over the onrushing goalkeeper. Argentina came close with a free-kick from Messi and an own goal that controversially was called back close to the end of the half by the referee would keep that match at 1 – 0.

The second half saw Eduardo Berizzo’s men begin to exert ascendency in the game and Argentina it seems were content to sit back, absorb pressure and hit on the counter-attack. Players like Miguel Almiron were constantly attacking down Argentine’s right side in an attempt to test the young Nahuel Molina who admirably held his own for the entire game. Eventually, Argentina held on to secure the 3 points and secure qualification to the knock out stages.

Scaloni made some changes to the lineup with Sergio Aguero stepping in to start instead of Inter Milan’s Lautaro Martinez also Alejandro Gomez, Di Maria and Guido Rodriguez started in midfield while in defence Tagliafico, Pezzella and Molina stepped in for Acuna, Otamendi and Montiel respectively. It was a game of two halves where Argentina looked like they were attempting to play on the counter-attack but it never really manifested and struggled to maintain possession for long periods. Some are suggesting that this may have been the game plan but it is difficult to shake the fact that chance creation and the ability to get some stability in the middle of the park was a major issue for Argentina.

Argentina are now secured in the knock out stages with just the match against Bolivia in the group stages remaining. Scaloni and his men will head into this match with tranquillity and it remains to be seen how he will approach this match. One thing is for certain the Argentina defence this time around seems to be a lot stronger and with the promotion of Cristian Romero to the starting line up and it is very clear that ensuring things are water right at the back seems to be the approach for Argentina this time around. The concern that is surely worrying Argentina fans at the moment is the inability for the strikers to put away chances in games, Scaloni has opted to use Lautaro Martinez, Sergio Aguero and Joaquin Correa but with little success so far.

So with a spot secure in the second round fans will be waiting to see if this new look Argentina team can have a decent run at the title this time around but the optimism that usually surrounds Argentina seems to have a more pragmatic sense of expectation this time around. With Brazil seeming to be firing on all cylinders in their group it remains to be seen if Argentina can step it up when it matters and get that senior title that has eluded them for so long.