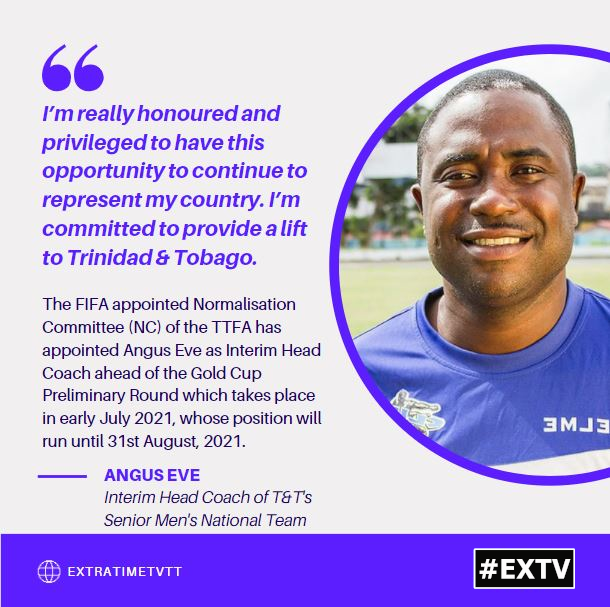 Today in an official release from the Trinidad & Tobago Football association from acting General Secretary Ameil Mohammed it was announced that after the surprise dismissal by Terry Fenwick by some that Angus Eve will take the reigns in an interim basis for the Trinidad & Tobago senior men’s national team.

The official statements is as follows:

The FIFA appointed Normalisation Committee (NC) of the Trinidad and Tobago Football Association (TTFA) has appointed Angus Eve as Interim Head Coach ahead of the Gold Cup Preliminary Round which takes place in early July 2021.

On accepting the position, which runs until 31st August 2021, Eve told TTFA Media, “I’m really honored and privileged to have this opportunity to continue to represent my country. I’m committed to provide a lift to Trinidad and Tobago, especially in this time where we are battling with so many different adversities at the same time.”

With the Gold Cup around the corner, the appointment of an Interim Head Coach had to be made in very short order. As such, a selection panel of NC Member Nicholas Gomez, Anton Corneal, Anthony Sherwood and Richard Chinapoo met on the 12th June to finalize the selection of the Interim Head Coach and Eve was recommended to the NC as the preferred candidate.

NC Chairman Robert Hadad stated, “We thank the previous coaching staff for their commitment and efforts. We now look forward to the Gold Cup competition and wish Angus all the best. We will do our very best to support him and the team.”

The NC will be consulting with Eve to finalize his coaching staff.

After the Gold Cup, a process overseen by an independent selection panel will invite and review applications, in anticipation of appointing the new Senior Men’s National Team head coach in September 2021

One of the many questions being raised is how much time will Angus Eve have with the players before the next game on July 2 at the DRV PNK Stadium, Fort Lauderdale, Florida, USA. If victory is secured by the Soca Warriors then they will play the winner of Cuba vs French Guiana on July 6, to join Group A – which comprises Mexico, El Salvador and Curaçao. The players who have just returned from the recent World Cup qualifiers are now in quarantine for reportedly 7 days and then the players will have to head back into quarantine before flying off to play the game. This means that Angus will not have much time to work with the players.

Trinidad & Tobago has been plagued by issues and while many called for the head of Terry Fenwick who in five games lost, draw two and won two the decision to replace him so close to a crucial game has raised eyebrows by the few who still even follow the game locally. Many speculate that the clause in Terry Fenwick’s contract if he got Trinidad & Tobago to the Gold Cup which reportedly activates an increase in his salary was the deciding factor and not necessarily results. In other words, the TTFA could no longer afford to sustain the salaries of Terry Fenwick and his staff which included former World Cup 2006 goalkeeper Kelvin Jack and Derek King. In most instances when a case like this happens the coach has to be paid some sort of pre-agreed compensation.

Another interesting aspect of the release is the statement that an “Independent selection panel” will invite and review applications for the new head coach. The NCC was appointed to normalize and clean a quite daunting mess created by many years of mismanagement which many wrongfully blame on the last administration due to narratives meant to mislead those who don’t know better. However a disturbing trend is being observed and not being addressed, why are the people who were responsible for Trinidad & Tobago football being the state that it is in are still involved in any way or form in the reconstruction of our football.

So now the former North East Stars, Saint Anns Rangers and Naparima Boys College Coach has the task of preparing the team in conditions that are hardly normal. For the few fans that still care about the local game, victory is always the desire but it seems that even before a ball is kicked, whoever is in charge of the “Soca Warriors” have to face wave after wave of problems. With the constant leaks of confidential emails and contracts to locker room exchanges consistently being reported by anonymous sources to the media, it seems nothing is sacred in the local game anymore. These trends have undermined every single coach who has taken up the position and continues to hurt the few that dare stands up to the task of taking the reigns of the national team and depending on the result in the upcoming game Angus Eve will be either a hero for a short time or unfairly attacked like many before. As a fan, we all wish him the best but the task is a daunting one.