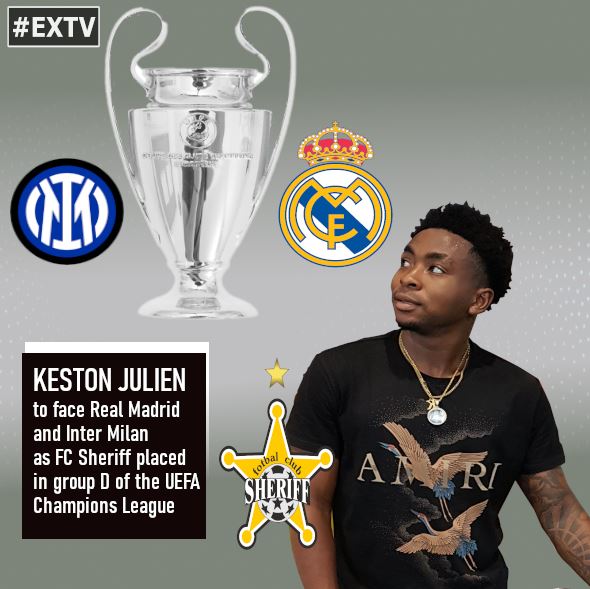 A historic moment for Trinidad & Tobago left back Keston Julien and Sheriff Tiraspol football of Transnistria – a territory that only declared its independence from Moldova back in 1990 defied many odds by qualifying for the group stage of the Champions League for the first time.

Today the draw was held for the UEFA Champions League and Keston Julien’s team were placed in Group D which include the mighty Real Madrid, Inter Milan and Shakhtar Donetsk. The reigning Moldovan champions, managed by Yuriy Vernydub, reached the group stage after eliminating Teuta, Alashkert, Red Star and Dinamo Zagreb. This will be the first time both teams meet in an official competition and Sheriff’s first-ever appearance in the Champions League group stage.

The 22-year-old Trinidad & Tobago man who hails from Gasparillo was an outstanding player since his primary school days and is spoken about in high regard by one of his former teachers Ashford Sooklal. He also earned further positive reviews when he played for Presentation College San Fernando under coach Shawn Cooper. Soft-spoken in nature he made his way to Europe and while he did not get the attention that Levi Garcia did he maintained himself at AS Trencin. When he made the move to FC Sheriff Tiraspol he chatted with EXTV about this move and his ambitions with this team to make history by making it into the UEFA Champions League for the first time for himself and the club. This ambition has now come to pass and now he will now face up against the world’s elite clubs and players.

The young Trinidad & Tobago man has represented the national team on 4 occasions and even though the national team has seen much better days his club form will no doubt serve him well in terms of being a mainstay on the national team. The UEFA Champions League is considered by many the pinnacle of world football and now this young man and his club from Moldova have made history together.

So while the world’s eyes will be focused on the “Galacticos” of Real Madrid and the stars of Inter Milan, the fans from the tiny Caribbean island of Trinidad & Tobago will have something else to look forward to when these games kick-off. The young man from Gasparillo, Trinidad & Tobago now steps onto the biggest stage and it is difficult to do anything but smile for this young man and his amazing achievement.