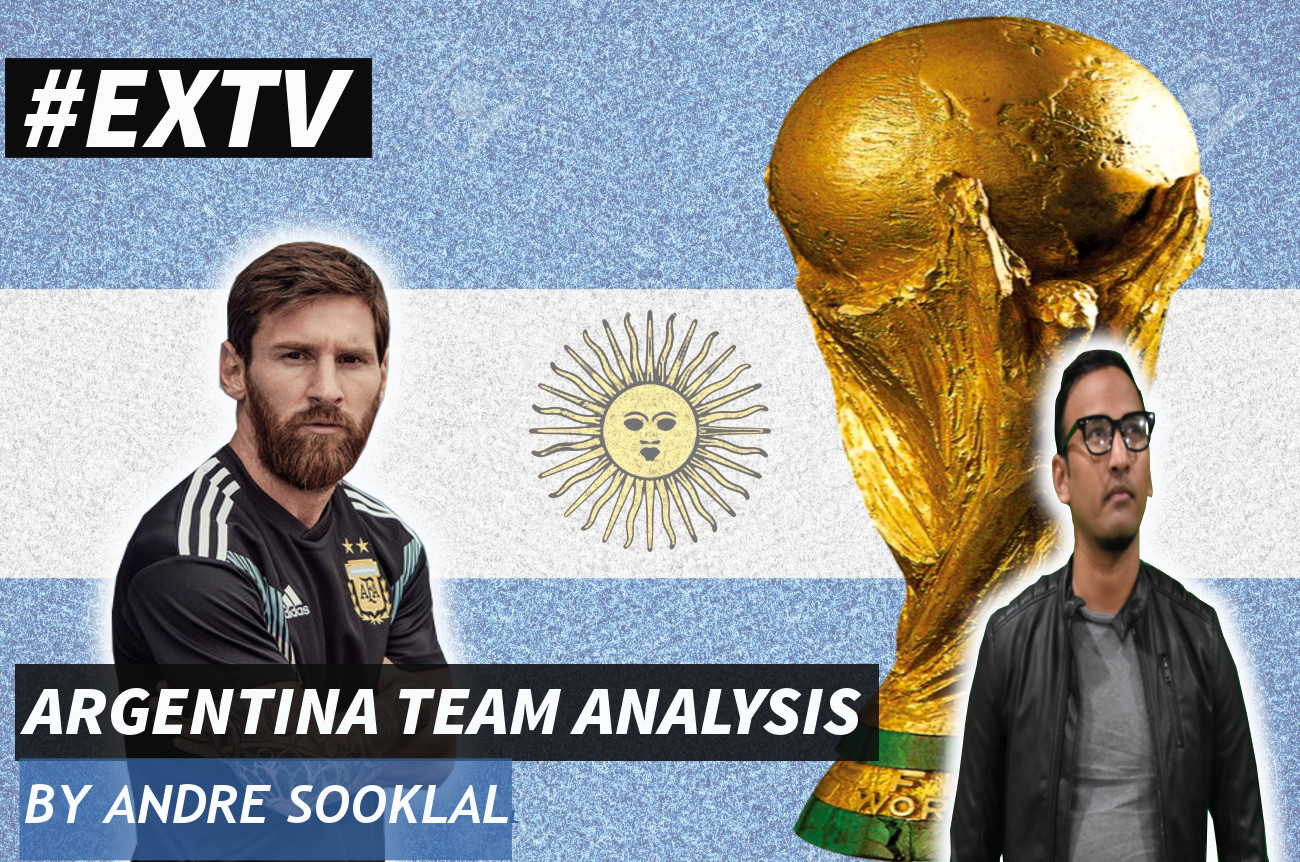 “Argentina head into Russia with way more problems than they did in Brazil.”

After suffering three final heartbreaks and enduring a torrid World Cup qualifying campaign it seems the Albiceleste head into Russia with way more problems than they did in Brazil four years ago. Sampaoli has his work cut out for him. Many are saying that this is Leo Messi’s last chance to win a World Cup (I disagree!) but let’s take a closer look at Argentina’s chances at going all the way to glory in Russia.

As I stated before in my Copa Centenario group break down of Argentina, a very cliché stereotype is recited whenever some fans discuss Argentina that “Argentina has an abundance of talent in midfield and attack but their defence is questionable.” – A vastly incorrect statement like all other generic statements made when the World Cup comes around. So after much speculation and debating worldwide, Sampaoli announced his final 23 and like all Argentina squads it caused an uproar. Now this may not be a big shocker for the die-hard followers of Argentina but Mauro Icardi after having a good season at Inter Milan was left out, defensive stalwart Ezequiel Garay (Who didn’t even make the 35 man preliminary list.), and Leandro Paredes were the most glaring exclusions. However to truly understand this team you have to look at the problems this team faced and continues to face. As stated above Argentina had a highly complicated campaign with Lionel Messi saving them at the last minute, had three different coaches and also had to deal with the peculiar issue of Bolivia fielding an allegedly ineligible player which completely turned the standings on its head, Messi retired then returned and the apparently a very corrupt and disorganized AFA just to name a few. Now heading into Russia, Sampaoli has lost his number one and most experienced goal keeper Sergio Romero and in most recent news, the team cancelled its controversial warm up game against Israel. The Selección can’t seem to catch a break.

So with all that out of the way and now looking at the squad Sampaoli choose and based on recent friendlies, it seems Argentina are most likely playing a squad that can play 4-3-3 and also 4-2-3-1 formations. Sampaoli is from the school of Bielsa and like Tata Martino before him, their teams take initiative with high pressing of the opposition when not in possession combined with high energy relentless attacks and this is where the first glaring possible weakness in the squad shows up. This system requires a team that collectively presses the opposition constantly with a high line and also dominates possession. The problem is that the current players especially in the wingback and centre back positions are not very pacey. Fazio, Mercado, Ansaldi are not known for their pace and as seen many times before, coaches that deploy this system can be undone by the fact that the defenders can be undone by teams that sit back and attack the high back line and defeat them with pace, particularly if the opposition has players that can take on players one versus one. Rojo  has hardly played all season but seems to be one of those players that play differently for his national team. He had the same criticisms heading into Brazil 4 years ago and turned out to be a crucial player. Otamendi who is a very talented central defender has shown that he can play in a system like this under Pep Guardiola (Who is also a student of Bielsa!) at Manchester City, but he does seem to be a bit shaky when having to deal with one on one situations. It also seems that Salvio who is primarily a winger will be used as a makeshift wingback with more defensive responsibility. In midfield there are other problems, after the terrible 6-1 defeat to Spain, the normally unstoppable Mascherano looked vastly out of sorts and many suspected that age may have finally caught up with him. All the same he was called up along with Lucas Biglia and this is where the second glaring deficiency shows up. With Biglia having an injury riddled season and Mascherano not at his best, Sampaoli has a genuine problem. Argentina simply do not possess any other midfielders in the squad with the ball winning characteristics of the previously mentioned duo. The only option I can see is that Banega is placed in that role, but let’s face it, ball winning is hardly his biggest strength. Other options may possibly deploying Lo Celso in a deeper role or possibly using one of the central defenders. This is a massive vulnerability and it makes the exclusion of Paredes even more baffling. If either Mascherano or Biglia are injured it will complicate things significantly. Players like Matias Kranvitter and Claudio Yacob who both sort of faded away were thought to be the future in these positions are no longer dependable options and as a result, vastly limited Sampaoli’s choices in this position.

Argentine teams, especially in midfield have always been associated with dynamic passers and controlling possession with relative ease, conversely this does not seem to be the case in recent years. It seems the once dominant midfield is now replaced with “water carrier” type midfielders whose job is to simply give the ball to Messi or the attacking players.  A style that worked well under Sabella to be honest and seems to be the way to get the best out of the current crop of attacking players. Messi is forced to drop deep and has to shoulder the responsibility of transitioning from defence to attack, however to the Barcelona man’s credit he still manages to score many goals even though he plays in a much deeper position for Argentina.

The attack as always is the envy of any team, yet many fans of the game are questioning the choice of Icardi being left out for three time choker Gonazlo Higuain. It is very well documented that he has choked up very easy chances for Argentina and seems like his confidence when playing for Argentina is at an all-time low. His club form is tremendously deceptive, he seems way more at ease for his club Juventus and it goes to show how powerful the psychological element of the game is. Icardi who has scored 36 goals for Inter Milan in all competitions this season, who is good in the air and lethal in the box would seem like a likely replacement but it seems as if his off field antics has not been well received by the team and the coach and also when he played he didn’t really perform that well for the national team. On paper it seems like a bad call but after working with professional clubs and around my country’s national team, team chemistry plays a huge part in how the team performs and it most definitely can affect overall performance. So Argentina are left with two options – Aguero recovering from an injury and Higuain who seems completely lost. I personally believe that Augero should start, once fit. Angel Di Maria is one of those players that has not been able to transmit his very obvious talent to Argentina in recent years, however I think he is still a very dynamic player who also has experience (If he can manage to not get injured!) and he is backed up by the Boca Juniors man Cristian Pavon, who honestly if the World Cup were to start today, I would start him.

Sergio Romero who has been a mainstay for Argentina for well over 8 years and has always performed admirably for the national team is now out of the World Cup. Nahuel Guzman of Tigres in Mexico has been called up as his replacement. The other options are Franco Armani who is an exciting prospect and current Chelsea man Willy Caballero collectively do not have much international senior level experience and will be getting a trial by fire heading into the World Cup. In my opinion the most likely candidate will be Willy Caballero, who got called up 4 years too late to be honest. He is a far cry from the dominant goalkeeper that caught everyone’s eye at Malaga years ago, he has now been assigned the role as bench warmer at Chelsea. All successful national teams all have continuity with goal keeping and Sampaoli must be ruing his bad luck after losing Romero. What is for sure is that, Sampaoli seems unsure of who is starting keeper is very close to the tournament and may opt for experience.

Based on recent matches, it seems as if Sampaoli will be likely going with the 4-2-3-1 formation. However as most coaches know that formations are moulded based on the philosophy of the coach. A 4-2-3-1 under another coach could be ultra-offensive while another very defensive and counterattacking. The estimated line up barring injuries will most likely be the following:

Of course this is not set in stone, based on the squad I can see many variations. Biglia and Mascherano starting as the “doble cinco” (‘double five’), basically this is the term dubbed when two holding midfielders are placed in midfield. This is a very likely scenario as well against more mobile and offensive teams and will serve as a good foil to help the backline that is far from pacey while simultaneously giving the attack minded players the freedom to attack with some tranquillity and balance. Simply based on form Augero should start but of course Sampaoli see’s these players up close and we will see. Most likely we will see the likes of Dybala, the very intriguing Pavon, Banega and even Salvio if Argentina need alternative attacking options. Banega is a frustrating player for Argentina fans, he can be extraordinary one day and extremely ordinary on another day, however Banega’s characteristics make him an essential cog in this midfield. With the responsibility of creating, insanely falling solely on Leo Messi for the last couple years, Banega has the ability to slot into midfield and even behind the strikers and create opportunities if the scenario should present itself. He was left out of the last World Cup squad, many suspected it was due to this very same inconsistency.

Make no mistake Argentina may have their problems but definitely have the ingredients to hurt any team on any day and the reputation they have earned as favourites at every tournament is well justified. Nonetheless it seems that this time around the Albiceleste head into the tournament with significantly more complications than they did last time around and for some reason no matter what squad is called up, Leo Messi shoulders the burden like many other number 10’s before him. In conclusion, Sampaoli are quite fragile heading into this tournament and will need many things to go right for them to lift the trophy in Russia. The World Cup is wonderful and who knows what will happen after the first whistle blows, this team can very well go on and win the tournament. However from a practical stand point, other teams are in better shape heading into this tournament and this by no means indicates Argentina are not capable but I think they just have too many obstacles to overcome and the tournament has not even started! Realistically speaking, a semi-final spot is the most likely where this team very optimistically will end up.