TOP 5 REASONS TRINIDAD & TOBAGO SHOULD CELEBRATE BUT NOT GLOAT ABOUT THE USMNT ELIMINATION! 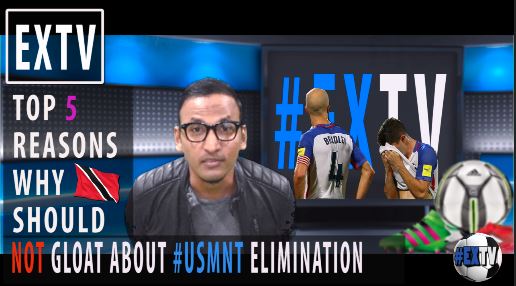 So before anyone jumps to conclusions let me be very clear that this post in no way is telling anyone not to enjoy the historic victory over the United States but to highlight something else. With this result, Trinidad & Tobago tapped into a darker moment in our footballing history. Our team affectionately known as the “Strike Squad” were on the verge of making in it to the World Cup in 1990, the nation was in a completely euphoric state and it all cruelly came crashing down when then-coach Everald Gally Cummings and his men were denied glory by a solitary strike from  Paul Caligiuri. The goal was dubbed  “the billion-dollar goal” and changed the history of football in the United States.  Trinidad & Tobago were left agonizing for years and to this day many involved are haunted by the thoughts of “What it?”  Fast forward to 2017 and on the final day of World Cup qualifying for Russia, an own goal from Omar Gonzalez and a wonder strike from Alvin Jones gave many Trinidad & Tobago fans a sense of satisfaction.  While this is not the first time that the “Soca Warriors” have defeated the Americans, the magnitude and the implications of the result could not be denied. However, while celebrating is well and truly justified due to the history of both teams. An uncomfortable question looms eerily in the minds of the few who can look past the result.  This team was one of the worst-performing teams the United States have produced in many years but did Trinidad & Tobago inadvertently give the US the slap in the face it needed?

While Trinidad & Tobago celebrate a significant victory it appears perhaps celebrating too much may come back to haunt them. Here are several reasons why Trinidad & Tobago should celebrate but not gloat about denying the United States entry into the World Cup in Russia.

Let’s start with the most simple of reasons, it shows a lack of class. Don’t get me wrong, in the world of sport, this is part and parcel of the game. The banter, the chants are normal but as a nation that supposedly sees itself as one of the strong forces in the Caribbean, we can at least attempt to show some sort of class.

Sure the US taunted us with tweets and condescending statements but hey, it does not mean we have to sink to their level, do we?
This is a team that we wrongfully act as if we are superior to and truthfully, we have done nothing to indicate that we are.  We have made it to 1 World Cup and in terms of achievements, there is no question. So let us enjoy our victory but also be aware that we have lots of work to do as a footballing nation.

4.) Get over Jack Warner already!

For many years the nation was happy to reap the benefits of this man while blaming him simultaneously for all our problems. However, he is gone!
Who is to blame now?  I constantly hear the rhetoric of Jack Warner did this and Jack Warner did that. However, the individuals left behind had the task of cleaning up the reputation of the country and had much fewer resources to do so. Instead of a fresh new start, we had people who were doing the same thing…serving their own agendas and with no benefit to our football …superficial or otherwise.  The one bright spot in our recent times was the hiring of Stephen Hart. He took a country in complete disarray and made us competitive again….and what do we do? We get rid of him first chance we get.  Many see Dennis Lawrence as a breath of fresh air but are the odds stacked against him?   The Jack Warner card is now overplayed and the individuals and so-called experts who have been there for years have done NOTHING  and have hindered progress. They were painfully exposed once Jack Warner was away from the football circles…while the US Continues to evolve and definitely stumble, we point fingers at everyone else except ourselves.

You read the headlines…Scandals, Agendas, Betrayals…..the sport we love is completely consumed by negativity.  In 2006, we found some sort of unity …sort of! And look what we accomplished.
The people who have been in these positions for many years have no bar for performance and seem to all say the right things but are enemies or progression. We still do not have data? analytics, player performance evaluation and to be honest and fair Dennis Lawrence and Hart before him made very active attempts to implement these type of methods.  Everybody and individuals who are responsible for such things are arrogant and walk around with this aura of superiority ….which is exactly what we accuse the US of.  With no proper measure of performance, these people continue to sit on their comfortable seats of complacency and yet wonder why the football region has left us behind. Anyone who challenges this is often ostracised or treated as an annoyance.  We have squandered millions. Our media coverage has been laughable at best up until only recently efforts were made to ATTEMPT to do what should be standard marketing methods for ANY organization.  The dispute between leagues, high school football and clearly a country that unity and progress is NOT the main goal but self-serving individuals who clearly want to maximize benefits to their own gain has made us repeatedly bump our heads. We are an arrogant, corrupt football nation and unless we fix the mess in our homes we have no right to criticize anyone!

2.)  A distraction from our real problems

Let’s face it, our record in qualifiers was abysmal at best. Managing 2 victories in the entire campaign is by any standard poor.  Sure, one of those victories knocked the USMNT out of Russia.  Many have praised Dennis Lawrence for his progressive approach to the team and make no mistake, he has made improvements. However, this victory has definitely covered many existing problems that were already there. The extremely counterproductive changing of coaches and single-handedly undermining our progression was made by removing Stephen Hart. He was not given the resources he needed to do his job (see top 5 reasons to not fire Stephen hart) and that destroyed what stability we had. Instead of fine-tuning our squad, the coaches (Saint Fiet, Lawrence) had the unenviable task of having to reassess and rebuild teams in very short time frames.   I will not presume to know the obstacles faced by the last 2 administrations. What is clear is that we do most of our damage off the football field and while we dance and continue to be “jamming still” with our most recent short-lived victory, I fear we will continue to flounder unless we fix these issues that plague us; which is an entire topic by itself.

Let’s be honest love them…hate them. The United States men’s national team is no doubt a powerful force in the CONCACAF region, with a very specific plan that has shown progression over the last 20 years.
A team that was considered inferior back in 1989 defeated us and instead of growing, we seemed to have been like children…stumbling around in the dark trying to find our way ever since. Many people reference World Cup 2006 and rightfully so but let us be honest…it was a collective series of events that worked in our favour rather than the outcome of some brilliant football development plan.  The US men’s national team has consistently performed at a high level. Off course, not making it to the world cup was not only devastating to them but has forced them to refocus and reevaluate their plans.

If there was complacency, it is definitely now completely gone after the way the campaign ended. We may have exorcised the nightmares of 1989 but we may have only done so by awakening and motivating a ‘sleeping giant’.