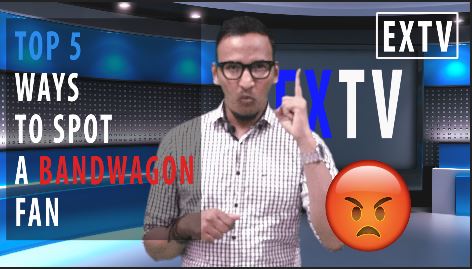 We all love this wonderful game of football, but unfortunately bandwagon fans or “bandwagonists” as they are known in Trinidad & Tobago are a constant annoyance to legitimate fans of the game. Here are five ways to spot a bandwagon fan, Caribbean style.

The Merchandise Fans
Now don’t get me wrong; there are legit fans who support their team and buy the gear, flags etc., but these bandwagon fans, in order to show their loyalty OVERCOMPENSATE to fit in. They would go out and buy everything in sight, sing the loudest, take thousands of pictures, often taunt fans who may not have the financial power to buy as much as they do and berate them for not being real fans!  Making quotes such as “if you are a real fan you would spend your money” and when the team loses these fans are never seen again until another team wins – after which they go on a spending spree for that new team!  Shame on you! SHAME ON YOU!

The Seasonal/Social Fans
These “fans” are nowhere to be seen when “their” teams are playing throughout the season or when they are struggling but they miraculously turn up for Finals or after they win. These are also the fans that appear once every 4 years for the World Cup. They profess their undying love for the team they supported for the last few seconds! They infuriate real fans with their comments like “it’s just a game”, “Don’t worry next time”,  “I am a {insert team here} fan for life”. These are the fans who actually say they don’t like football that much 99% of the time and don’t even know the players. Yes! These people exist…..(long stare)! They are EVERYWHERE! You would see them on most social events and in the  middle of all the pictures!

The Google Fans
These are probably the worst. Let’s be real: Google is an amazing tool for getting instant information, however, these *Fans* mask their definite lack of knowledge with a simple click. They are very quick to whip out statistics and facts after a quick google search to reinforce their vast “knowledge”. They are guilty of using every generic football statement that the media puts out: “Serie A is boring “, “La Liga is a 2 horse race”, “South Americans are divers”, and the most popular “England are going to win the World Cup because they have the best team & league” leaving legitimate fans fuming by their “knowledge”.
These are the most annoying because they can mislead people into thinking they are legit football fans and they are most definitely not!

The “Diehards”
The need to let everyone know that the team that they supported for the last 5 minutes is the best! Often saying stuff like “What has your team won?”  or “My team is on top right now!”. When asked to name players from the squad they can’t answer and are 100% guaranteed to ditch their team when they are struggling. They love to use the  “I am a fan from “day one” status. They usually know little or nothing about the team or football in general! To sum it up they only support “winning teams”.

The most popular yet the simplest: The Overnight Fans!
Listen, nothing is wrong with falling for a team since technically we all started somewhere; but nothing, NOTHING is more revolting and aggravating to fans of the game when people who don’t care about the game and who disregard football 99% of the team just decide the team that is on top at the moment is the team they love. I am looking at you Chelsea, Man City, Barca and Spain fans because by the time the World Cup comes around they will be supporting other teams!
They like these teams for the simple reason that they are winning right now and when they don’t, they switch. No matter what team you support all football fans agree that these are the worst kinds of bandwagon fans!