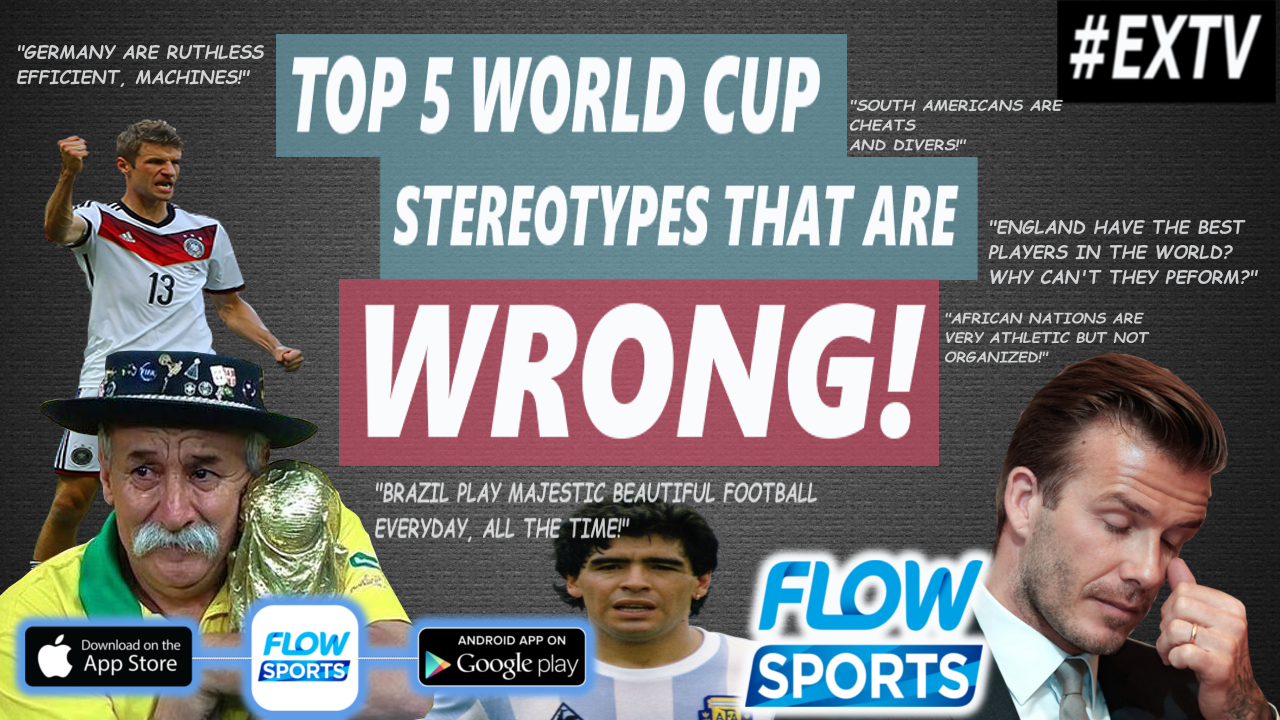 So it’s upon us once again…the World Cup and this time it’s in Russia! The entire world stops what they are doing for 4 weeks to focus on this… however in the midst of all the excitement if there is one thing that does not seem to go away, The generic. Cliché and sometimes outright inaccurate stereotypes for certain teams echoed by fans during the World Cup, while some are true.  #EXTV breaks down the top 5 World Cup Stereotypes that are wrong! So unless you are living under a rock the WORLD CUP has begun and even though this is not narrowed down to just this tournament, the stereotypes that I am about to mention are extremely prevalent and a true annoyance to legit fans of the game!

Many “Experts” like clockwork being to recite the overused Clichés and sometimes cringe-worthy statements about teams. Sure some may be based on truth But many them are vastly inaccurate and usually were created by people with vastly outdated knowledge of the game!  There so many awful stereotypes we found it difficult to narrow it down to five.
So without any further delay let’s got into it, shall we!

African nations are very athletic but not organized!

I roll my eyes so much at this one that I may have ruined my vision, as far back as I can remember I keep hearing the stereotype that African teams are disorganized and often dismissed as ONLY athletic  and They LACK discipline etc. (which federation isn’t?)…and while there is some truth to that, it was one of the most outdated and lazy statements to be made. Often made by *analysts* who are either lazy or don’t do research.

Some of the most talented teams in recent years such as Egypt, Senegal, Ivory Coast among others have performed admirably at international tournaments and the high standard of football at the African nation’s cup is a huge advert for how the level of football on the continent is at a high level. Sure I can hear people say..well they haven’t won a world cup….well guess what neither have the Dutch and they are responsible for one of the greatest innovations in football (Total football)  and produced some of the best players and teams EVER….have any of them won a world cup…of course not! But to make statements like that is just…baffling!

SOUTH AMERICANS ARE FIERY AND CHEATS

Countries in South America have been labelled by many as cheaters and divers and often labelled are dirty players who even though have the most skilful, flamboyant players in the game are essentially sinister, theatrical and will do anything to win….I can shout out many examples and like I said before some of these stereotypes do have some element of truth..But the generalizations are just ridiculous..The best example is the famous “Hand of God” goal scored by none other than Diego Maradona! Many…have damned the entire continent as cheaters as a result of this while wrongfully dismissing the undoubted and amazing talent produced by these nations and placing this label comes off as well…Bitter!

Our good friend Terry Fenwick was a part of that England team and played in that game and probably has the most reasons to generalize and be angry about it…guess what He isn’t! Are they passionate…definitely! Are they guilty of bending the rules ….yes ….(But they are not the only ones!) To label them all like this is totally inaccurate and for those who are not biased will admit…respectfully! cheating is a very universal thing.
and not the sole characteristic of South American teams!

This may have been true years ago but it is far from the truth in recent years, Germany Are they serial winners? A most definite yes! But have been absolutely anything BUT rigid, ruthless or efficient! To use those words to describe they play really does not do justice to how Germany has evolved over the last 4 World Cups. Producing the most exciting footballing talent, playing more enterprising football…Germany does show nerves…just look at the last World Cup, up until they destroyed Brazil 7-1 they had tough going and YES they got results they most definitely did not look like the rigid, machine that the cliché preaches.  The national stereotype has some basis..but the #Die Mannschaft (D MAN SHAFT) have played some of the most enterprising and entertaining football in recent years and to throw that label on them quite ridiculous!

England have a full team of world-class players but can’t see to win?

I think everyone…including  English fans have heard this before every international tournament.   The English Premier League is by far one of those most popular leagues in the world, watched by pretty much everyone!  It is now attracting all the world superstars and is loaded financially.  The marketing of this league is fantastic…it is marketed as the best league in the world!  With world class players! When the three lions don’t perform at international tournaments many are found scratching their heads! Why? But England has World Class players? How is it that England with so much class can’t perform better?

Why don’t they Perform?

England has produced some top…TOP quality players without a doubt..but since 1966 have never won an international tournament at senior level since.  Roy Keane after England were eliminated from the 2010 world cup said English media and fans need to be honest with themselves on what they consider world class? Long gone are the days of them hoofing the ball up the field and resorting to another stereotype Of “only long balls” …the three lions have definitely made some strides into changing their style of play without a doubt. However MANY HAVE ARGUED THE the hype surrounding England very misleading and many often buy into the very inaccurate favourites tag.
Let me be clear I am not trying to pick England…but even Fabio Capello when he coached the 3 lions stated that the English Maybe the best but only a small percentage are English. Wheather you love the premiership or not….England has always promised a lot and delivered little The most recent example was when the “Golden generation” never delivered.
As I said before England have and continue to produce TOP quality players but I am sure every time someone uses the phrase England are a World Class team and labelled as title favourites there is a collective set of eyes being rolled by more informed fans.

So before we head into number 1 here are some notable mentions:

Brazil play beautiful SAMBA football every day all the time!

It was very hard to break down this top 5 but this one is definitely a worthy number 1 for our list! Brazil and quite rightfully so have earned the right to be a bit boastful about their world cup accomplishments. After all, they have won 5 world cups! More than anyone else! They have produced some of the best teams and players ….well EVER! Pele, Ronaldino, Rivelino of the 1970’S,  Ronaldo some may consider the (REAL RONALDO) Zico, Kaka……and so much more! Just to name a few!  The Brazil TEAMS of 1970 and 1982. (IT’S ON YOUTUBE CHECK IT OUT!)
It has been a long time since the Brazilians have displayed outright Samba football at the national level…
Even in 1994 when they won…it was far from classic  Brazilian football and the fans did not approve…in 2002 they laboured through qualifiers and Scolari at the time muscled his way through the tournament and even though they had some brilliant individuals they were far from classic Brazil. It seems that it is very easy to say that Brazil plays wonderfully pure football and their players are saints who can do no wrong and demolish teams is…unfortunately something from the past.
It simply does not exist any more….Brazil make no mistake are always strong and will always be feared but outside very few moments of brilliance the Brazilian national team has not displayed Samba in a long time…they have adapted their style of play to the modern standards and rightfully so! As I said before Brazil earn their title as favourites without a doubt but there seems to be an age old statement that implies that Brazil’s route to the final is almost like a birthright. Just look at 2014…
it seems as if even the players believed only to be cruelly brought back down to earth by Germany.
Who knows Brazil may go on to win the World Cup in Russia but not because of Samba but because they have managed to mix their beautiful style and merged it with the organization needed for modern football.

So there you have it, folks …EXTV’S top 5 world cup stereotypes that are WRONG…

All these statements are based in some form of truth but are often sensationalized and constantly repeated.
Football has become globalized and the game has changed significantly…teams are breaking tradition…
the established powers are being challenged and even some like just ask Italy and Holland. The eras of traditional stereotypes are sadly a reflection of outdated mind-sets Teams like Spain who were once the labelled as habitual flops are now a World Power. A statement if made before  Euro 2008 ….was laughable…!

Of course, this is all light-hearted and based on opinion and It’s ok if you disagree! But one thing is certain you will hear at every world cup the previously mentioned statements! These stereotypes are of course harmless but when its still being used by so-called analysts is just downright lazy and outdated when used in today’s football.

So ladies and gentlemen let me know what you think? Do you agree…do you disagree? Let me know!